You can be my hero baby 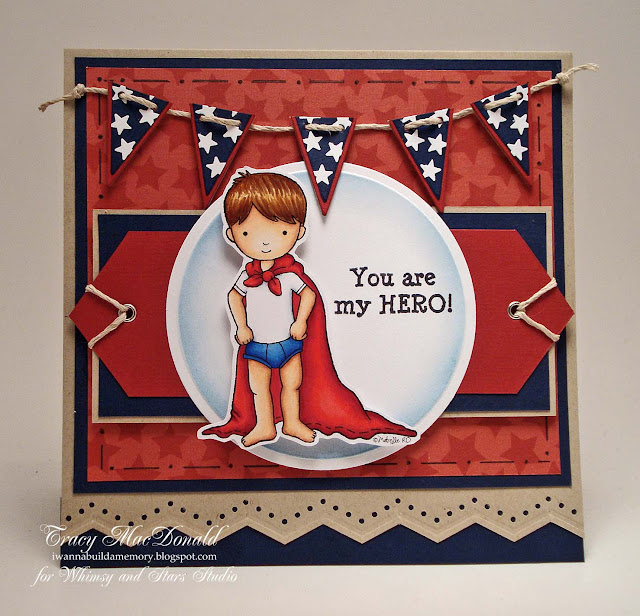 My pastor and his wife have two little boys ages 6 and 3.  The three year old asked his mom if he could be Superman when he grew up.  LOL  She told him he could be whatever he wanted to be so we'll have to wait a few years and see if his super powers develop.  I couldn't stop thinking about him the whole time I was making this card and I believe it will be going home with his mom very soon.  Maybe she can use it to write him a note for later or stick it in his scrapbook.  :-)
Although this is pretty CAS it took quite a bit of work.  The banner pieces were made in my usual way by cutting off the arms of a Sizzix star die cut.  There's a layer of chipboard and two layers of Bazzill.  That's pretty simple and straight forward, but do you see those little stars on there?  Those were punched one by one with a Martha Stewart star hole punch and glued on one by one.  I needed some Spiderman sticky finger super powers for all those itty bitty stars.  :-)
Now I haven't even told you yet, but maybe you've guessed that this is a Whimsy and Stars Studio Mabelle R.O. image.  I just think he's adorable and you can find him in Mabelle's etsy store.  If you aren't a follower of The Whimsy and Stars Studio blog then you may have missed the BIG announcement Mabelle posted yesterday.  At the end of the month she will be releasing some new rubber stamps through The Crafts Meow as a new stamp illustrator for them.  Mabelle's rubbing elbows with some pretty awesome talent over there like Nina Brackett.  You can read about her new adventure right here for yourself.  :-)
I'd like to enter this card into the following challenges:

Tomorrow's the last day to link up for my candy draw.  Meanwhile I hope you enjoy my little super hero and have a great week!

Email ThisBlogThis!Share to TwitterShare to FacebookShare to Pinterest
Labels: Whimsy and Stars Studio

Another Fab one Tracy . love this little boy he is fab and the string is a nice touch on the bunting Well done what a super card.Hugs Elaine

This is perfect for your pastor's little one, and I do hope she does a scrapbook it along with that story attached because it is adorable as is your card.

So sweet! Makes my heart melt it is sooo cute. Loe the coloring and the card is totally fabulous. I so love to look at your creations!

This is adorable! Yeah, Sometimes I call myself a brain surgeon when I'm gluing tiny pieces held with tweezers and tiny dots of glue!!!
Anyway, those stars DO pop against the navy!
Smiles, Kim

Such an adorable image and so beautifully colored! Those tiny stars were well worth the effort!

I love this card so much Tracy. The image is delightful and the colours are wonderful. As for that bunting, it really does look fantastic and definitely worth all you hard work sticking on those tiny stars

Fabulous design and colours and image. All of it ... just fabulous! x

Adorable! This little boy is super sweet. The little one is going to giggle and the mom is going to cherish this. Love how you made your banners!

Your star banner was worth all the effort, it turned out fabulous! Super cute image!

Stunning card Tracy, and what a lovely story! One of the children where I volunteer wants to be the Prime minister, Jo x

You're insane woman! Cutting out all them lil' bitty stars and then digging around in the carpet to find the one's that dropped and then gluing them back on...that's crazy! (Says the woman who bakes tortilla flowers..LOL!) BUT your zany creative talent is what sets you in a league of your own. All the bitty bits you do to go the extra mile. LOOOOVED that story. You should buy him a little cape and gift wrap with the card. After all it does take a village to encourage and raise a super-hero!
Hugs to you and happy 4th almost.
P.S. Caught Jethro last night licking my card....you were right!!! Hahahaha
Twang

Oh, I love it! What a sweetie pie! Mabelle's images are all so wonderful! I really like the design you've done here, Tracy! It's fabulous! Enjoy your celebrations tomorrow!...Nancy :o)

Well Tracy you are my hero when it comes to cardmaking, your blog is a true treasure, and I love to visit you, here is always so much inspiration to find.

Love how your banner turned out, it was deifintely worth all the work you had with it. The little stars looks adorable!
The card is very cute, and I love the story behind it.
When someone ask my 5-yearold cousin what she want to be when she grow up, she always says Belle in Disney's "Beauty and the Beast".

Have a nice day! :)
hugs
Hanna

Oh my goodness!! All of those stars punched and glued?!! You're the one with the super powers ; ) He's adorable and your pastors son would be sure to treasure it always!

Oh Tracy this is so cute & what a great story about your pastors son...I love that his Mom told him he could be anything he wanted...some would have told him that was a silly idea!
Hugs, Renee

Tracy, you've done it again! Love the layout of this one and all the little details are just right for a boy's card. Hugs, Tracey xx

Your card is fantastic!
Your colouring is amazing:)
Hugs, Heidi:)

What a fun idea behind this card Tracy! So sweet, the ideas little boys have (and when they grow up, they still believe their Superman, lol!). Your card is gorgeous, such an adorable image!! Hugs, Ira
irascreacorner.blogspot.com

I forgot to add- found your beautiful card on MIM!

Love this image it's so cute!! Gorgeous colours too!! Saw you on MIM!!
Nat -x-

Totally awesome card!!! Thanks for participating in our Chocolate,Coffee and Cards challenge this week! Hope to see you again next week!!!
~DEANNE~

This is absolutely adorable, Tracy! The image is too cute and your coloring and card design are fabulous! Saw Mabelle's big news yesterday! How exciting!

Oh VERY nicely done! Love the banner! Thanks so much for joining us at The Sisterhood ‘SEEING STARS’ challenge and please come back again soon!
Darlene
one of the 'Sistahs'
DAR’S CRAFTY CREATIONS

This made me smile! I love the banner on here too. Thanks for playing with us at Paper Playtime! :) Janis P.S. I'd love it if you'd pop over to my other challenge blog, Pause Dream Enjoy Challenges,
http://pausedreamenjoychallenges.blogspot.com/
and play this week. The challenge is to make a project for someone who's left footprints on your life. Smiles!

Gorgeous card, Tracy - love the colours, the image and that cute banner.

Thanks for joining us on PaperPlay this week.

Awww he is SO adorable Tracy - love the red, white and blue. Fabulous as always. Saw it on MIM. Deb

Isn't this the cutest?? YOu've colored him beautifully, too. I like the subtle blue shading on the circle die cut behind him.

Thanks so much for playing with us at IBSIC this week!

Love the color scheme and the fab coloring! Thanks for joining us at Kaboodle Doodles’ “A Boy’s Life” Challenge!

Gorgeous, love the colours and your colouring is ultra amazing :-) Kerry x

lol! That's too cute Tracy...I hope he does grow up to be superman. Love the card...Beautiful details and the stars on the banner are a really great touch...Now I know what to do with all of the leftover hearts from my card this week! hehe!

Tracy
I love your super hero - brought back a lot of memories for me with my sons running around with their caps and using a lot of imagination! Have a great 4th - Hugs

absolutely gorgeous! thanks so much for playing this week at party time tuesdays!

Awwwwwwww I LOVE your card! Thanks for playing along with us at Kaboodle Doodles this week.

Such a cute story and such a cute card! Thanks so much for playing along with Paperplay this week!!

oh he is CUTE! my boys always played super hero as little ones, now they do it on a grander scale with their game systems! ha!

of course in our family, we all have special secret super powers..... tee hee!

Adorable. Love the colours & design. Thanks for joining us at Kaboodle Doodles this week.

WOW fabulous card LOVE the colours and also your bunting too! Thanks for playing along at Top Tip Tuesday this time for our 1 for the Men challenge, hugs Samantha :0)

Tracy, this is too cute. That's one of my favorite W&S images. Love your coloring and the banner. Bet your pastor's son will love this.

Thank you for sharing your Red, White and Blue card with us at Card Makin Mama's.

Beautiful card Tracy. Your pastor's boy will love it. Love the layout and the sentiment. The image is super cute! Hugs, Ivonne

Cute card I love the colours - really bright and cheerful and that image is just SO cute. Thanks for joining us in the Crafty Bloggers Network Challenge.

Absolutely adorable. Wonderful card design and great coloring. Thanks for playing along with us in The Sisterhood of Crafters in our "Seeing Stars" challenge.

A wonderful card. I love the image and the story is fantastic. Thank you for joining us at Incy Wincy.
Nikki F x

How cute is he & I love the story of your pastor's little son wanting to be Superman. Too cute the imaginations of a child.
I could have sworn those stars were part of the DP you used for the banner. Love it. Just the perfect touch.
Happy Huggies ~
Sharron♥

Great guy card, love the colour combo, and the image is super sweet. Thanks for joining the '1 for the Men' Challenge at Top Tip Tuesday.

Tracy, I LOVE this-as always, your coloring and design are wonderful!
So glad you shared this with us at Phindy's Place. Good luck and best wishes!

Brilliant card and image!! Thank you for sharing with the Cutie Pies!!
Hugs Hazel xx

Perfect card for any wanna be Super Hero :o)
Amazing colouring and fab LO.
Thanks for playing along with us at Cutie Pie this time.
Good luck.
Debs xx

I'll simply say, I love your cards. This image is so cute and you have amazing skill when it comes to coloring. I'm lovin' that banner too!
Smiles,
Lisa xx

Awww, gorgeous card!! Lovely story to go with it too. As always I am so inspired by your colouring.

Thank you for sharing with us at Make It Monday this week.

Cute story about your pastor's son! Love your card too!!!! I saw it on Make it Monday!

Such a sweet card and fabulous design. I love your banner too! Thanks so much for joining us at Party Time Tuesdays this week.
Danie xx

Ahhh, this is just too adorable! What a cute image and lovely colors! Really great card! So happy you played along at CC&CC! Come back again soon! Aloha!