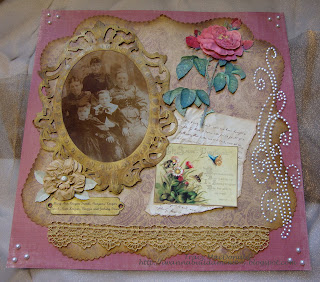 Here's another one of the heritage layouts I did last year. My great-grandmother is also in this one. She's the little girl on the bottom left. It was taken in the early 1890's. Her mother is sitting behind her. I just love old photos and stories about my ancestors. I'm a huge genealogy buff although I haven't really fooled with any of that in a while.
For this layout I printed out another frame pattern. It also had a design on it, but for this one I used a stylus to trace over the pattern which raised it up on the opposite side. I then inked the piece and the raised edges caught more ink and defined the design.
The rose was an image off the internet. I printed it out three times and cut the print outs up so that I could layer the image. I then covered the whole thing with Rock Candy Crackle Paint. Just a note of advice here. DO NOT use crackle paint on matte finish photo paper. Once the crackle crackle it started to fall off and it took the ink with it. After I put that whole thing together I had to redo it on regular cardstock all over again.
The flourish on the right hand side was done with a piece of acetate and some dimensional puff paint. I found a flourish image online and blew it up to the size I needed. I then put it under the acetate and used it as a guide to make the paint dot pattern.
The paisley background paper was cut out using a piece of die cut cardstock and then I cut around it with scallopped decorative scissors. I then went back with a paper piercer and poked holes in every one of those little scallops. Yikes! That was a job!
Hope you like it. Thanks for popping in.
Tracy

Wow Tracy that is Beautiful ! I love it ! Such a blessing to have such pictures to for your heritage album !! You did a super job girlie !!
HUGS, JANIE

Sooo super gorgeous LO, Tracy!!! I love it! What a wonderful LO of your Great Grandma! I love that frame, it's sooo pretty! Awesome colors, flowers, and lace and distressing! Love it all. Thanks for sharing :)! *hugs* Steph :) :)

It's beautiful Tracy!! I love everything about it!

This is beautiful.
Love it.

Tracy, first let me thank you for all the kind words you left on my blog. This is such a beautiful layout too, I've done some heritage pages myself for a scrapbook for my mother... but they didn't turn out nearly as gorgeous as yours!