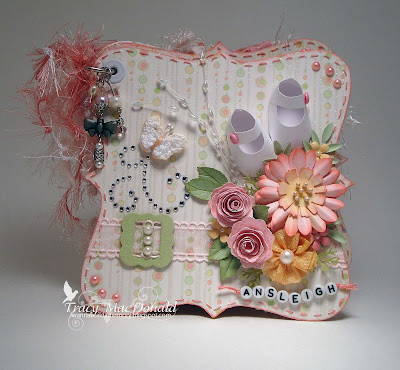 If you're a follower you probably remember the card I made a few weeks ago for my daughter's boss who is expecting her first child.  Well this is the mini album I made to go with the card.
As you can see it's a girl and her name is going to be Ansleigh.  The entire album is made with DCWV's Nana's Nursery papers.  I used a chipboard album for the base.  All the pages have hand stitching and inking around the edges.
For the cover I made all the flowers.  Some are inked, some are Glimmer Misted and rolled, and some are Glimmer Misted seam binding.  The ribbon slide is chipboard covered in Crackle paint.  I crocheted the butterfly and gave him a bling trail.  The baby shoes were created from a pattern I found here.  I resized them for the cover.  There are some bead charms I made and some pieces of fun fibers tied to the book ring. 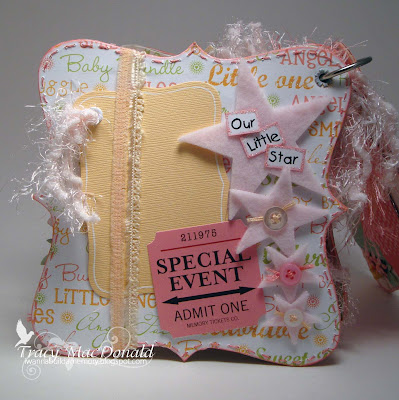 For the first page I cut stars with a Sizzix die from a sheet of fleece I found at Hobby Lobby.  I thought it was felt at first.  It's soooo soft.  I added some buttons with embroidery thread, some fibers, and a cute ticket stub. 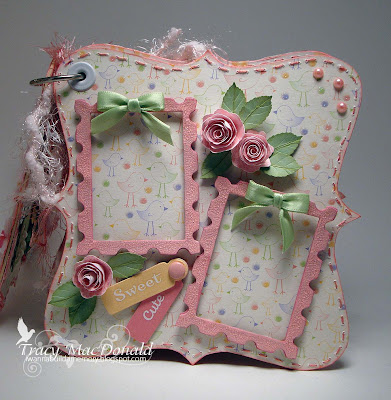 Page two has double postage stamp frames cut from a Sizzix die and covered in Crackle paint.  There are some more rolled roses and a couple of little chipboard pieces covered in paper and decorated with some Cosmo Cricket rub ons. 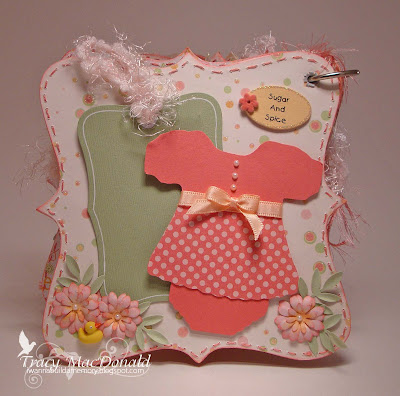 For this page I found the dress image online and printed it out to make a template.  The flowers are punched and inked and the sentiment is on another little chipboard piece.  Isn't that little duckie by the flowers cute!  He's a button I cut the back off of. 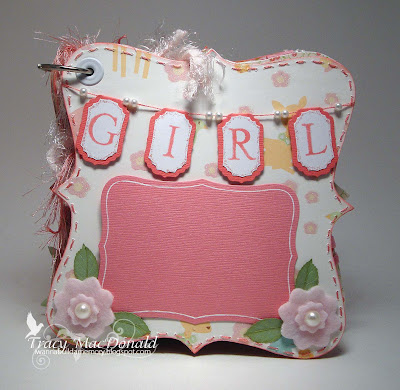 Page four has a large photo mat tucked behind some fleece flowers.  The banner was created with a Nestie die and strung on some embroidery thread with pearl spacers. 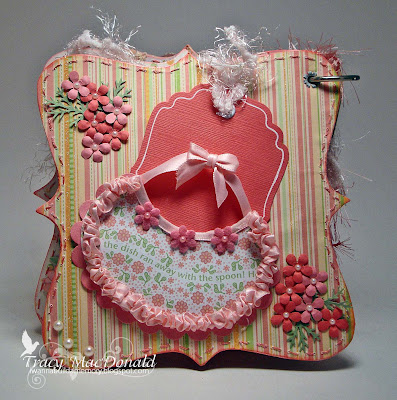 Page five is a punched flower frenzy.  I made the bib by cutting out an oval with a Nestie and then cutting out the neck with a circle Nestie.  I ruffled some pink ribbon and covered the neckline with some more of it. 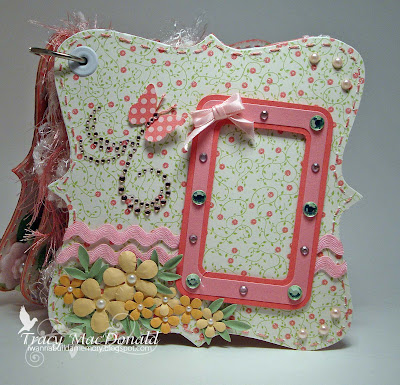 For page six I used some more punched flowers and cut the frame out with a Nestie die.  The butterfly is a MS punch and I gave him a pretty bling trail too.  He has embroidery thread antennae. 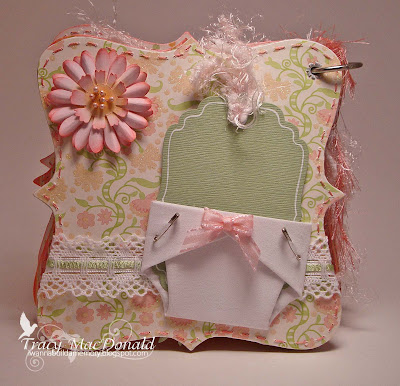 You can't have a baby album without a diaper in it!  I found the pattern here.  I wanted it to have the feel of a cloth diaper so I covered the paper with some thin cotton fabric which made it so easy to add those little "diaper" pins.  The lace has a pretty white ribbon run through the middle, but I found some matching green fiber in my stash and ran that through on top of it.  There's another handmade flower too. 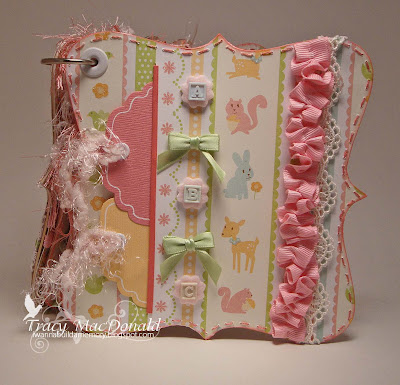 Page eight was the hardest page.  Not because it was all that difficult, but because I kept cutting it wrong.  I wanted to keep the little animals from being covered so I decided to make the page a pocket.  I cut the paper along one of the pattern lines and added a little lip of cardstock to help make the pocket opening easier to find.  The two tags just slide right in.  I added some ABC buttons on some little fleece flowers and ruffled some more ribonn which I added on top of a pretty piece of lace. 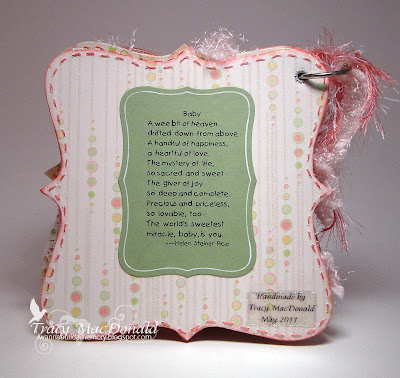 And here's the back cover.  I found a sweet Helen Steiner Rice poem and added my name and the date by gluing on a piece of acetate I printed out the info on.
I hope you like the album.  I think I'll give it a whirl in a few challenges.
Top Tip Tuesday--one for the kids
Digi Design house--anything but a card
Inspire Me Fridays--anything goes
Divas By Design--one for the girls
My Mum's Craft Shop--anything but square
Have a blessed day!

oh my this is gorgeous, such pretty papers, colours and embellishments.Your daughters boss will treasure it...a beautiful keepsake:)

thank you for joining us at MMCS

I love this mini so much! It is just too cute! I wish I had a reason to make a baby mini! Maybe I should make one...just because! Thank you so much for always inspiring me! :o)

Oh my oh my Tracy, you've outdone yourself once more with this precious piece of work. This is truly an album to be cherished, so much love and eye for detail, just love love this!! Hugs, Ira

This is AMAZING Tracy! I'm off to pick my jaw up off of the floor! What an incredible gift!!

Here I am again ;-) Congrats on your top 3 over at Sentimental Sundays, they were as mad about your chicken as I was!! Hugs, Ira

Tracy, once again you have created the most amazing work of art. Those little shoes are adorable. Your attention to the smallest detail is flawless. I have a feeling the mother will be near speechless! Hugs, Sarah

Wowza, Tracy, this is totally amazing! STUNNING! you really did an outstanding job here!

Thank you for sharing this @ Inspire Me Fridays!
hugs & blessings!

Oh my goodness Tracy this album is so adorable! So much detail in a mini! I love the way you used fabric and fibers in this mini! So cute!!!

This little album is so amazing! Each and every page has something fantastic! The baby booties on the cover, that bib with the ruffled ribbon, the butterflies . . . it's all so gorgeous! Thanks for joining us at DDH!

This is the most gorgeous baby album. I just finished leaving you a note on YouTube when I popped over to check out your blog. As soon as I saw the first photo I knew I'd forgotten to tell you how cute those baby shoes are on the cover! They just make it pop. So cleaver, the whole album is, thanks so much for sharing it with us. Now I'm off to see the inspiration you have waiting on your blog! Patti

I love, love, love this album! It is sooooo pretty! Great work!!!

Just Me and My Shadow said...

What a truly gorgeous album. You have incorporated such wonderful ideas into it and I am sure it will be treasured by the recipient. Thanks for showing.

OMGoodness, Tracy! What a stunning mini album! Wow, I am just in awe of all the detail you added. All your hand-made elements are simply amazing. Love that each page is unique and so exquisitely detailed. All I can say is WOW!!

Oh wow Tracy! The family is going to treasure this!! Each and every page is just as special as the one before it! Absolutely precious!
Hugs~
Dana

This has to be the prettiest, sweetest, most adorable project I've ever seen! New to the DT team so I've seen several different things but none this sweet!
Thanks for joining us at Diva's by Design
*HUGS*
Tammy Louise
ps. thanks for the inspiration, I'll have to make one!

wow! this is amazing. love all the details. gorgeous project!

What a sweet mini Tracy! Love all the pretty embellishments and your eye for detail!

Wow, wow, wow, Tracy!! You've put so much love and work into this gorgeous little mini. The lucky recipient is going to LOVE it...what a beautiful keepsake. I wish I knew someone having a baby that I could make one for :)

Hi Tracy. I hope you are having a great weekend. This book is so much work and so adorable! Very inventive. I love your warning! The different colors and shapes is what makes it stunning...each page unpredictable. LOVE IT! Samara xox

Wow! This is amazing - so much detail gone into every page of it. A wonderful piece of work.

Thanks for joining in with us over at Top Tip Tuesday for our 'One For The Kids' Challenge this week :)
Good Luck!

It's so beautiful! I absolutely love every page! :) And all the flowers you made just look great. It looks like it must have been a lot of fun, too! :)

Goog grief - what a lot of work you've put into this beautiful project! Your boss's wife will be delighted!
Thank you so much for coming over to play at Top Tip Tuesday!
Hugs
Eiglas
x

BEAUTIFUL! I totally love this book! so sweet! lots of work awesome, thanks for joining us on this weeks One for the Kids Challenge @ Top Tip Tuesday,

WE are having a DT call too! and we have Candy on offer for those promoting it check this post out for the info : Top Tip Tuesday DT CALL

Beautiful! Love the designs of each of the pages. Wonderful!

wow this is stunning, just seen it on top tip tues as one of the top 3 winners and had to come and have a look at it on your blog. I love the shoes on the front a great idea and lovely papers very pretty, I'm sure the recipient will love it.

Wow! this is awesome! absolutely beautiful and so many gorgeous details!!

Oh this is beautiful! Thanks for playing at MMCS this week. x